This event has passed.

On 19th June, Inhale, the 3.1m mega-diesel soot particle will be migrating its way through the city’s streets, just like the real pollutants circulating our air.

After its first successful outing at Festival of Nature on 9-10th June, where it attracted the attention of 15,000 visitors, Inhale will make its way along Rupert Street – the centre’s most polluted street – during rush hour on 19th before ‘settling’ on College Green – for one day only. The event hopes to draw people’s attention to national Clean Air Day on 21st June and spark conversations around what we can all do to shape our city for the better. 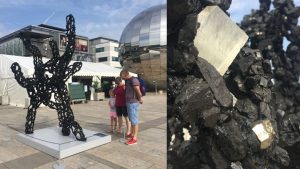 Diesel soot was chosen as the focus of the artwork as diesel vehicles are a significant contributor towards air pollution in the UK in particular. In Bristol, air pollution is thought to contribute to five deaths a week. Materials used in the sculpture reflect the makeup of an emitted diesel soot particle, with coal representing the particle’s black carbon, pyrite representing the metal residue shed from exhaust and brake pads and calcite to represent the chipped road surface.

Commissioned by UWE Bristol, Luke Jerram – the acclaimed artist behind the Museum of the Moon (currently touring internationally) and the giant waterslide ‘Park and Slide’ in Bristol’s Park Street in 2014 – produced the sculpture. Luke, UWE Visiting Senior Research Fellow, said: “The artwork was in part inspired by the recent VW Diesel scandal.  Finding out there are more than 15 carconagens present in Diesel exhaust was scary. I hope this artwork adds to the pressure on our government to stop its support for all polluting forms of transport”.

This event was made possible by Our City Our Health a UWE Bristol public engagement project communicating the science from national research project called UPSTREAM. Led by UWE Bristol, UPSTREAM is a cross-disciplinary project combining expertise from economics, public health and ecology, and backed by a panel of experts in urban development, policy and impact.

Working with some of Bristol’s best-loved artists, Our City Our Health will be capturing public opinion on priorities for a healthier, more sustainable city throughout 2018.

Funded by the Wellcome Trust.