What is air pollution and why should I be worried about it?

Air pollution is caused by gases and particles released into the atmosphere by various activities including transport (road, shipping, aviation), people burning wood and coal at home, industry and agriculture. Dust and sea salt also contribute to air pollution.

The World Health Organisation (WHO), European Union and UK government have health-based limits for pollution, including nitrogen dioxide (NO2) and particulate matter (PM10 and PM2.5) which are particles with a diameter of less than 10 or 2.5 micrometres.

In 2017, a Bristol City Council report found that around 300 deaths each year in the city can be attributed to air pollution. This equates to 8.5% of deaths in a year. Recent research by Imperial College London has confirmed these findings.

Bristol City Council has monitored air pollution in the city since the late 1990s. The council has eight continuous analysers, over 180 passive diffusion tubes that measure nitrogen dioxide and three sites that measure particulate matter pollution.

Data from the council’s monitoring stations can be viewed on the Open Data Bristol platform. A summary of the data on air pollution in Bristol is available from the 2020 Air Quality Annual Status Report.

Find out more about air pollution and its health effects:

What are the sources of particulate matter pollution in Bristol?

The government estimates that burning wood and coal in our homes is the largest contributor to national particulate matter emissions at 38%.

The Department for Environment Food & Rural Affairs (DEFRA) publishes maps of particulate matter concentrations across the UK. These maps provide a conservative estimation of air pollution concentrations and its sources.

Other and natural sources of pollution such as secondary particle formation and sea-salt are the largest contributor to air pollution. However, these pollution sources can’t be controlled by the council and their concentrations cannot be influenced by people changing their behaviour. 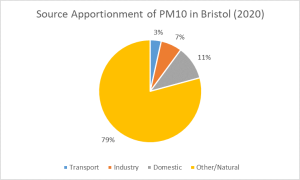 The map below shows the distribution of the proportion of domestic PM2.5 as a percentage of the total for 2020. 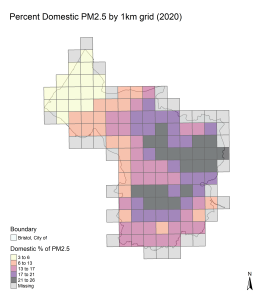 In 2020, Bristol City Council produced a report on the impact of solid fuel burning in Bristol.

The report also indicated a significant growth in the numbers registered wood burning installations in Bristol. Whilst there were 120 wood burners installed in 2007, this increased to 901 in 2017.

Emissions from solid fuel burning mainly impact on concentrations of particulate matter. In terms of the health effects, exposure to PM2.5 is the most serious and harmful, although nitrogen dioxide and other pollutants all add to the burden of disease, to a greater or lesser extent.

Current evidence suggests there’s no safe limit for exposure to particulate matter pollution and that people burning wood and coal at home are a major cause of air pollution in Bristol.

What plans are in place to tackle particulate matter pollution from burning wood and coal?

The huge growth in the number of solid fuel burning appliances used in UK and Bristol homes has exposed the failure of existing smoke control legislation to control air pollution from domestic sources.

The government updated its Clean Air Strategy in 2019.  The strategy outlines how the government will deal with all sources of air pollution. Options outlined in the strategy to reduce the impact of domestic solid fuel burning include:

The Environment Bill that is currently going through parliament has several references to solid fuel burning and proposes increased regulation of the sale of wood and coal for domestic burning.

Bristol City Council is looking into how it can tackle particulate matter pollution.

I need to burn wood to keep warm – what should I do?

Open fires and wood-burning stoves have risen in popularity over recent years. Stoves are now an additional form of heating for many households in both urban and rural areas; for a minority of people they may be their sole heat source.

Not all forms of domestic burning are equally polluting. The level of pollution produced can be affected by how well the stove or fireplace is used and maintained and what fuels are burnt.

If you own a stove you can take simple steps to limit pollution from it. Using cleaner fuels in a cleaner appliance installed by a competent person, knowing how to operate it efficiently, and ensuring that chimneys are regularly swept, will all make a big difference.

DEFRA has simple guidance for people that need to use wood burning stoves or open fires to help reduce the environmental and health impacts of their burning. – Open Fires and Wood-Burning Stoves: A Practical Guide

If using your stove or fire is the only way you can afford to keep warm:

For more information on what you can do please go to the Clean Air for Bristol FAQ: 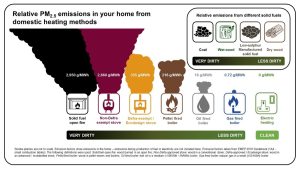 Is burning wood better for the environment than fossil fuel?

No. Producing and burning any sort of fuel has an environmental impact. Burning disrupts local wildlife and water, causes soil erosion, and creates harmful air pollution.

Wood is wrongly considered by some to be an environmentally friendly fuel or carbon neutral.

Wood as a fuel has a large environmental footprint and is a major source of particulate matter pollution in urban environments.

It takes years for the carbon dioxide created by wood burning to be reabsorbed. Significant and harmful emissions are also produced during the production, transportation and manufacturing of wood fuels.

Small, and especially older, domestic wood-burning appliances are a large source of other harmful pollutants, such as particulate matter and black carbon.

A review of heating systems found that after coal-fired boilers, wood burning stoves have the second highest negative environmental impact. 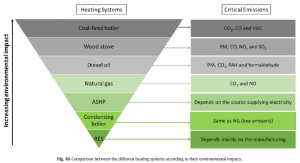 How is particulate matter monitored?

The Department for Environment Food & Rural Affairs (DEFRA) have an approved list of monitors which provide high quality data that can be used for compliance and regulatory purposes.

Unfortunately, due to high costs of the technology it is not currently possible to establish and maintain extensive networks that measure particulate matter pollution.

Bristol current has two PM10 monitors and two PM2.5 BAMs that are used to monitor how the city’s air quality complies with EU limits and UK Air Quality Objectives. Data from these monitors are available on the Open Data Bristol platform.

In recent years, there’s been a growth of low-cost sensors for citizen science purposes. Sensors include Luftdaten, Smart Citizen Kit, Plantower and Alphasense.

These sensors have some limitations, but they can improve our understanding of particulate matter pollution. The sensors aren’t accurate enough to measure particulate matter concentrations or compliance with limit values but do provide indications of general pollution levels and pollution changes from day or day.

The real value in these low-cost sensors is how they can be used to raise awareness of air pollution and encourage people to become citizen scientists.

Bristol has a number of these sensors in operation that are owned and maintained by and the data for these sensors is also available on the Open Data Bristol platform.

As part of the Slow the Smoke project, we’re installing a Beta Attenuation Monitor in Ashley and a small number of low cost Luftdaten sensors. These will help us understand daily and seasonal variations of particulate matter concentrations. We will compare data from the monitors with weather and meteorological data to get a better understanding of the impact of wood and coal burning on Bristol’s air quality.