What is air pollution?

Air pollution is made up of gases or particles which are harmful to humans and other life. The health impact is bigger the higher the concentration and the greater the exposure. For some pollutants there is no safe limit and exposure to even fairly low concentrations is harmful.

The most concerning pollutants within Bristol are nitrogen dioxide (NO2) and particulate matter. Particulate matter is defined by the size of the microscopic particles as this affects the impact it has on health.

NOx is mainly emitted from road traffic, particularly diesel engines. When it’s released into the air it turns into NO2 through reactions with other pollutants and sunlight. NO2 is a poisonous gas and UK and EU standards exist to control concentrations. These limits are currently breached in Bristol.

How different types of vehicle contribute to air pollution

Different types of vehicles contribute to air pollution in different ways, as shown in the graph below.

Diesel vehicles contribute 96% of the nitrogen oxides (NOx) pollution in Bristol. This is mainly caused by diesel cars (40%) followed by buses and coaches (23%) and diesel vans (22%).

The council and government are investing large amounts of money to reduce the pollution which buses create.

*Note that buses carry far more passengers than cars for their proportion of emissions; the chart does not reflect that. 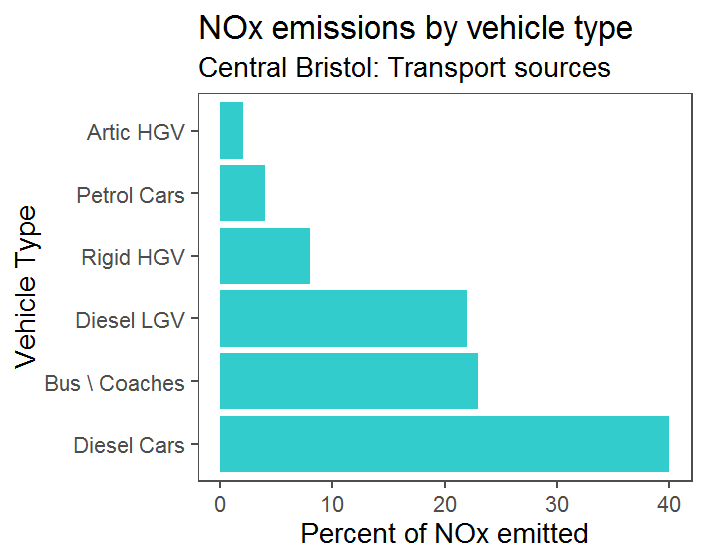 Vehicles sold in the UK need to comply with European regulations for air pollution. These are known as EURO standards and each revision reduces  the permitted pollution emitted from vehicle exhausts. The current standard for vehicles sold from 2015 is Euro 6.

Many vehicles emit more pollution when driven in the real world than in laboratory tests. The diagram below shows the UK government data on emissions from different car types. It shows that diesels emit much more NOx than petrol cars and that the gap between the test standard and average real world performance is much greater for diesels. 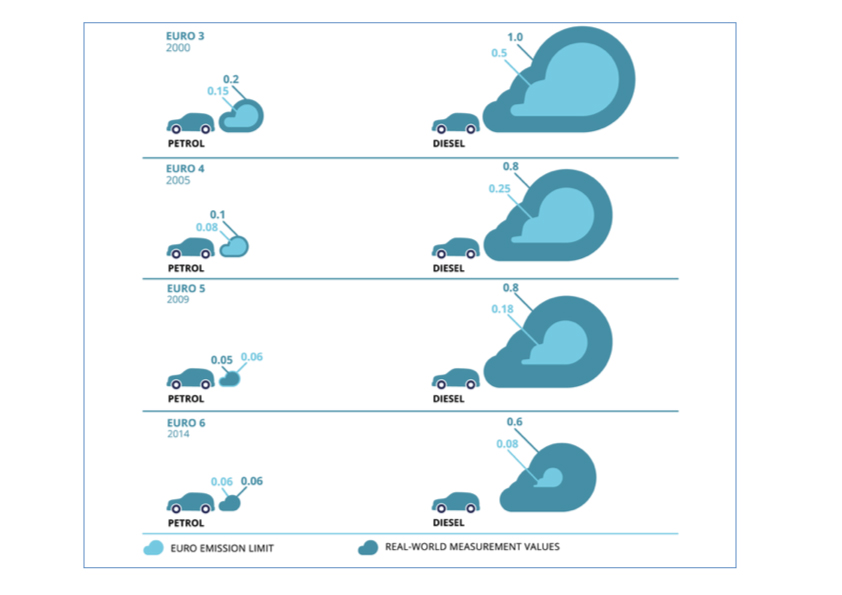 PM10 and PM2.5 are classifications of different sizes of particle. PM10 and PM2.5 refer to particles of equal to or less than this size in micrometres (0.001mm). Larger particles can be visible in the form of smoke.

NO2 is completely invisible. PM10 and PM2.5 are invisible too. This can be a factor in society’s failure to date to address the problem.

Bristol City Council is concerned about both NO2 and PM. At the moment NO2 is our top priority for a number of reasons, not least the legal requirement for us to reduce it.